Add Fuel, whose real name is Diogo Machado, was born in Cascais, Portugal in 1980. He expresses himself as an illustrator and visual artist. He graduated in graphic design at the IADE, Institute of Visual Arts, Design and Marketing in Lisbon. Since 2007, Add Fuel focuses mainly on his artistic work.

First known under the pseudonym "Add Fuel to the Fire", he first imagined and created a visual universe that can be described as exuberant, populated by a multitude of joyful and eccentric creatures. A world influenced by comics, video games, animation, science fiction and popular and urban culture.

In 2008, the Portuguese artist decided to shorten his name by adopting "Add Fuel". He also makes a decisive choice, a great lover of the motifs of his country, he turns to the traditional Portuguese mosaics, these geometric mosaic tiles called "Azulejos" and which dress the buildings and cities of Portugal. It is thus towards an artistic creation paying homage to the craft industry of his native country that the street artist naturally turns, he shows a real fascination for the glazed ceramic.

In his unique art, Add Fuel is able to mix two visual expressions that are a priori irreconcilable, he combines traditional decorative elements with contemporary and urban forms. His sense of detail is impressive, he plays with balances in an uncommon harmony, symmetrical repetitions allow him to create accumulations and optical illusions. Add Fuel literally plays with our senses.

His compositions and vector drawings with multilayered patterns produce a form of poetry, the interpretation remains free and open, it is up to the viewer to let himself be carried. Add Fuel poses as a defender of heritage with the use of traditional tiles, his stencils reveal a complexity that only he has the secret. This masterful attention to detail makes Add Fuel an artist to watch closely.

We are pleased to present a shortlist of works by the Portuguese artist. 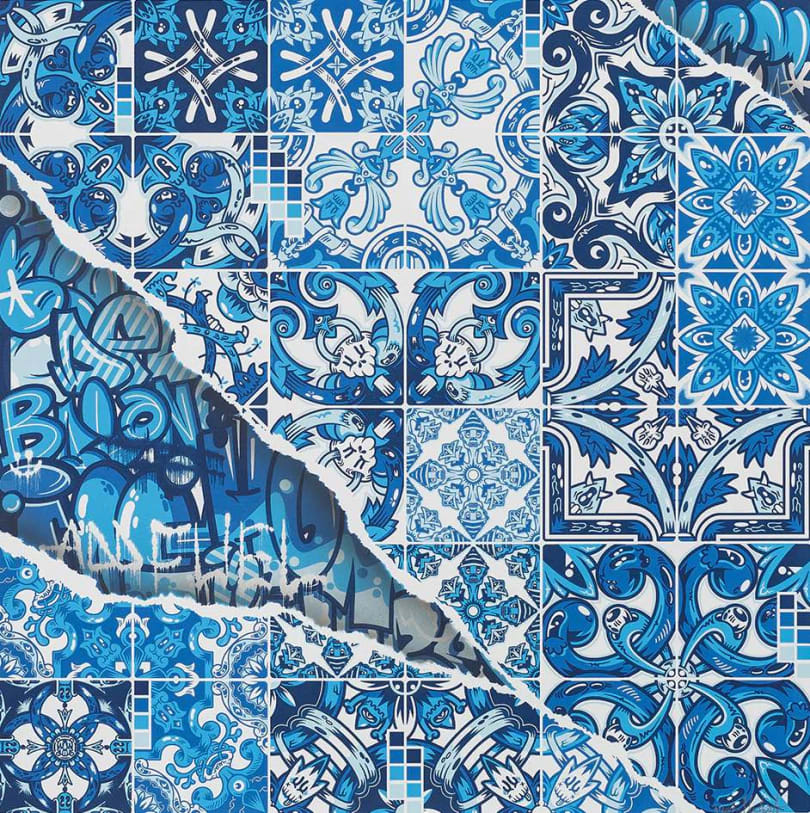 I want to sell or estimate a work by Add Fuel

Do you want to ask for help to acquire a work by Add Fuel ?