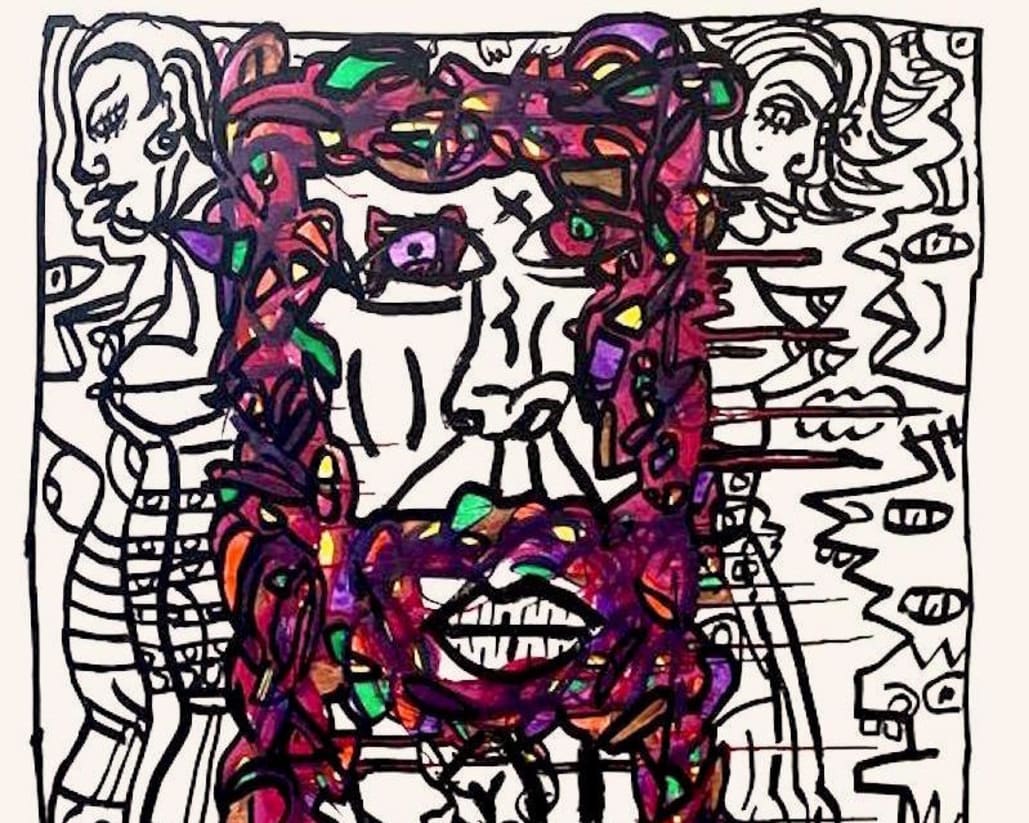 Robert Combas was born in Lyon in 1957. He is a painter, sculptor and illustrator. At the same time, Robert Combas has a passion for music. In the 1980s, he participated in the birth of free figuration.

Considered as one of the greatest French artists of his generation, in 2020, he is among the 300 most highly rated artists in the world.

At the end of high school, he trained at the Montpellier School of Fine Arts. Robert Combas has always advocated freedom of creation. In 1979, just after graduation, he presented his paintings in an exhibition in Saint-Etienne entitled: "Après le classicisme".

In the early 1980s, alongside Hervé Di Rosa, Robert Combas met the art critic Bernard Lamarche-Vadel, and artists Catherine Viollet, Denis Laget, Jean-Charles Blais, Rémy Blanchard and Jean-Michel Alberola. It was with them that the artist organised an exhibition in 1981 in the art critic's flat. "La figuration libre" was born, this name echoes the American artists of that time, and is characterised by an unbridled joviality. For these artists, the paintings should inspire laughter and happiness, joy and good humour. Themes such as sexuality, love and music are approached with naturalness and simplicity.

In 1987, Robert Combas fell in love with a woman, Geneviève, she became his muse.

"I have always painted and drawn and I went to the Beaux Arts when I was 9 years old. My work comes more from the "doodles" of school than from working at the Beaux-Arts. I was a rather average student. Needed to paint. It was men who brought me to paint. It's hard to name names, I think you can see it in my painting sometimes. Basically, I'm trying to be an expressionist of the 80s. I come from a family of 6 children, my father was a worker, and my mother was a housekeeper. I went to high school until I was 17, then I went to the Beaux Arts in Sète for a year, then to the Beaux Arts in Montpellier where I spent five years, I stayed there until I graduated. It was during the last three years that I began my first works which were to become what was later called "free figuration". The teachers often controlled me, but I was free, I did what I liked. The first canvas I made I changed it several times, I painted on it over and over again, then I separated it into 4 parts, then into 3, I cut them up and burnt one of them. It was after this canvas that I started to make very free, very colourful, quite violent canvases and with a lot of characters who were often fighting or joking with each other, I made black humour. I used to do a lot of battles because as a child I scribbled on the tables of the graffiti school on the notebooks. My first paintings were "Cowboy versus Indian", "Japanese versus American", "Naval Battle". I always wanted to do something completely new, I always had the need to stand out from the others, I think I'm a "dandy". So I passed my painting diploma in Ste-Etienne in front of a jury, in this jury there was Bernard Ceysson, director of the museum of Ste-Etienne, he liked my work a lot and he proposed me to participate in an exhibition at the museum "Après le Classicisme". When I asked him why he was proposing this exhibition, he answered that in France there was no one yet doing this kind of painting and that my painting was very close to the idea of the Italian "Transavantgarde" and the German "New Fauves", but had nothing to do with them. I did this exhibition, I met Bruno Bischofberger, Daniel Templon and other people who looked at my paintings with interest, they bought some pieces from me. So I went up to Paris to live with Di Rosa and Louis Jammes. I always thought that my work had to work, I strongly defended it and that's why it worked. Me, I really try to do something new, I try to get out of myself and not worry about the resemblance with someone. I try to be as honest as possible, and in art we thought it was impossible to do something that we couldn't explain. At the Beaux Arts it was like that, I wanted to prove the opposite. I was blocked since kindergarten, at 20 I was unblocked by a mass work, I got my diploma, I had nothing intellectual but I had an enormous amount of work to do."

I want to sell or estimate a work by Robert Combas

Do you want to ask for help to acquire a work by Robert Combas ?