Focus on a work: The Scream by Edvard Munch

In "Focus on a work", Art Shortlist invites you to discover masterpieces that have made art history. Today, we take a look at The Scream by the Norwegian expressionist artist Edvard Munch (1863-1944). Let's examine this memorable work. 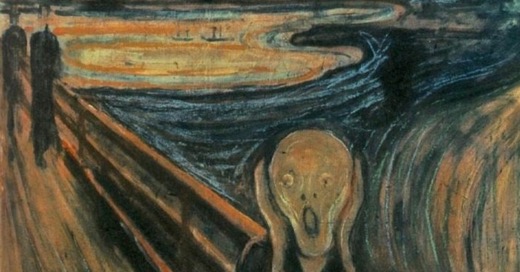 Edvard Munch was a Norwegian engraver and painter. He is considered one of the precursors of the expressionist painting, thanks to an exhibition in Berlin in 1892. Today, he is certainly the most famous Scandinavian artist in the world and The Scream is no stranger to international recognition.

To better understand this work, it is important to know more about the man and about his childhood. At a very young age, he encountered illness and death. His mother died of tuberculosis when he was only 5 years old. His older sister died shortly afterwards from the same disease. 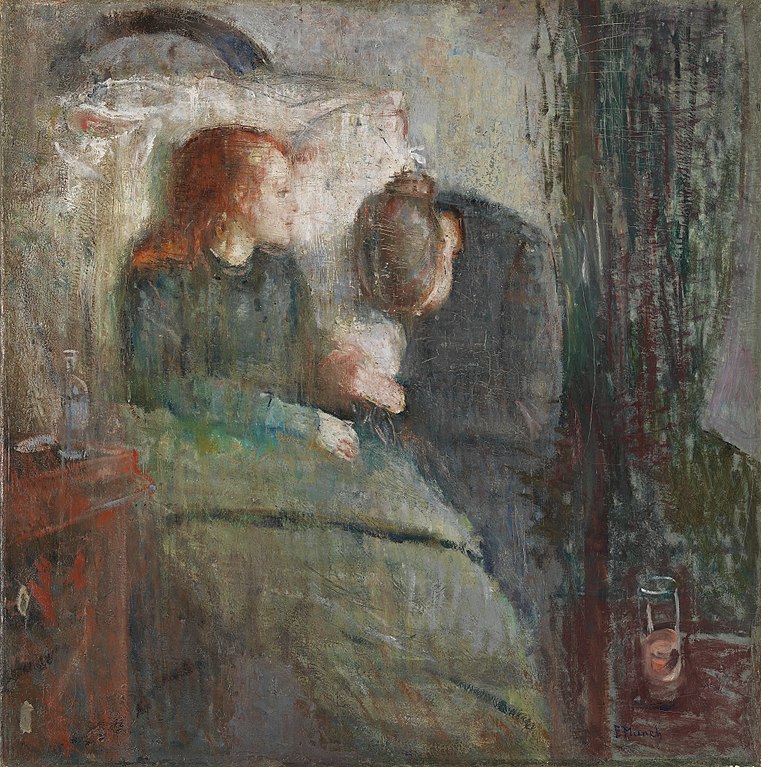 The Norwegian remained traumatised by this passage of his life. He was often affected by depression.

Another of his sisters was diagnosed as melancholic and his brother died only a few days after his marriage.

His father, for his part, became withdrawn after these various tragedies and even became depressed and aggressive. He raised Edvard in religion and told him many legends and ghost stories. 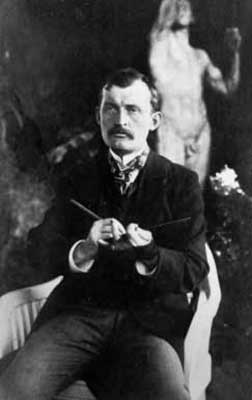 From the age of 16 he wanted to become a painter. He painted subjective and psychological subjects. His themes were death, fear, pain, anxiety and melancholy. Through his painting, he wanted to express "the most subtle states of mind".

There are 5 versions of The Scream

The Scream ("Skrik" in Norwegian) is a series of five works created by Edvard Munch between 1893 and 1910. Of the five works, there are four major versions and one lithograph. 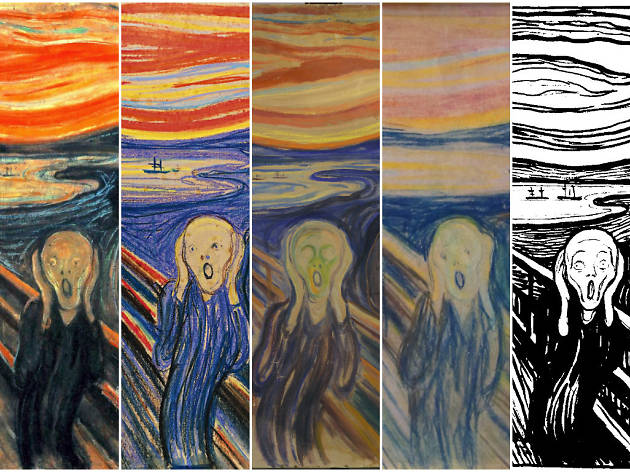 The most famous version is a tempera on cardboard from 1893 in the Nasjonalgalleriet in Oslo. It measures 91 x 73.5 cm.

Another tempera on cardboard from 1910 is in the Munch Museum in Oslo, measuring 83 x 66 cm. The museum also holds another pastel version from 1893.

There is also a pastel version from 1895, presumably in a private collection.

The lithograph is in black and white and was made in Berlin in 1895.

The Scream is part of a series of paintings called the Frieze of Life. This series is an allegory of the course of life.

An extract from the artist's diary provides information about The Scream

On 22 January 1892, Edvard Munch wrote these lines in his diary:

"I was walking along a path with two friends - the sun was setting - suddenly the sky turned blood red. I stopped, tired, and leaned on a fence - there was blood and tongues of fire over the blue-black fjord of the city - my friends went on, and I stayed there, trembling with anxiety - I felt an infinite scream passing through the universe and tearing nature apart.".

First of all, one might ask where the scream comes from? Indeed, the extract from Munch's diary suggests that the scream does not come from the main character in the painting. This character seems frightened and even covers his ears, which reinforces this idea. 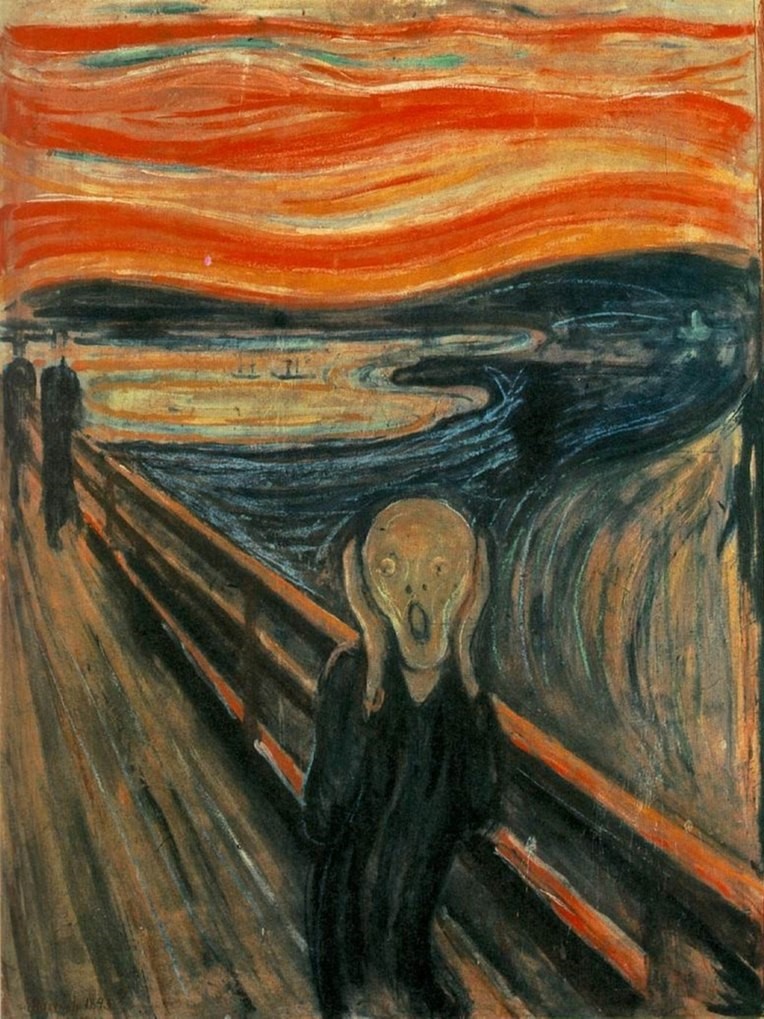 Some suggest that the scream is in fact a phantasmagorical one, linked to the artist's feelings about nature on that January day in 1892. The figure is in fact a representation of Munch himself and his existential anguish.

The Scream of a Volcano

According to Donald Olson, a professor of astrophysics at the University of Texas, this scream could be inspired by a natural phenomenon.

On 26 August 1883, Krakatoa, an Indonesian volcano, erupted on a scale rarely seen before. These eruptions caused tsunamis and a deafening noise. 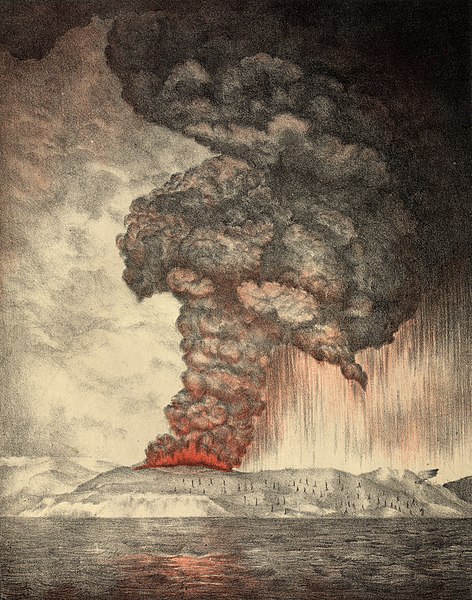 Lithograph of the Krakatoa eruption from 1888

The sudden awakening of the volcano is said to have triggered strong emotions in Edvard Munch, who remembered it even ten years later when he took his first Scream. According to some scientists, he could have witnessed it even from thousands of kilometres away.

Indeed, the sound of the eruption was at least 172 decibels, so loud that it was heard 4,800 kilometres away. Also, millions of particles of volcanic ash were scattered in the atmosphere all over the world, including in northern Europe, in Norway.

These two passages from Munch's diary confirm that it was the eruption he was talking about: "Suddenly the sky turned blood red" and "I felt an infinite scream that passed through the universe and tearing nature apart".

The red hues and dark skies, which provide a striking contrast, could therefore be inspired by this historic eruption in Indonesia, which is likely to have had a global impact.

Munch's Scream is a striking work because the figure depicted is clearly recognisable. However, before analysing the character, it is interesting to look at the colors used, which are anything but usual for the time. 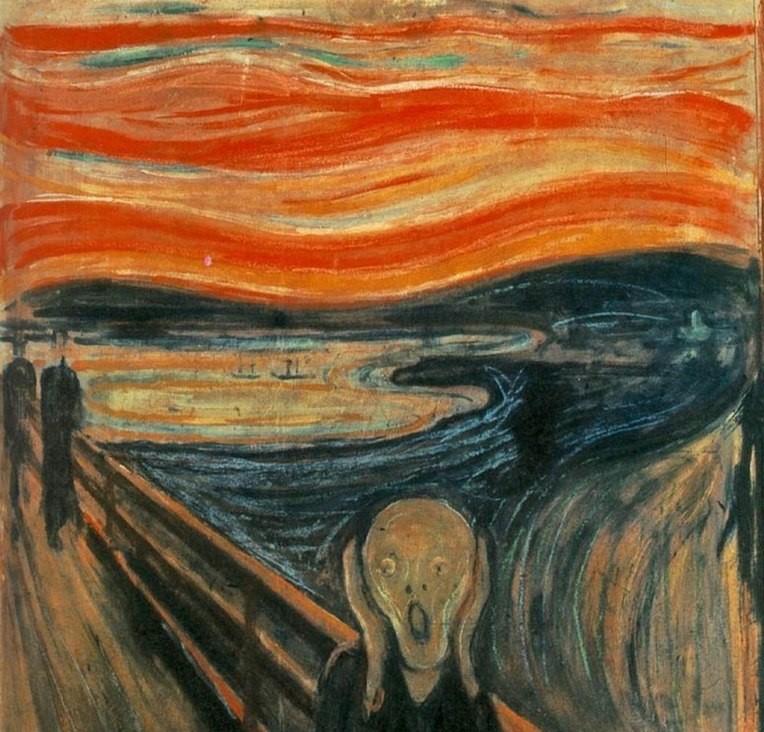 To the right of the bridge that splits the painting in two, we find colors that seem to fly, worthy of the most incredible sunsets.

The palette is composed of orange, red, ochre, yellow, green and blue tones. These colors associated in a strange way give an anxiety aspect to this work.

After analyzing the colors and the context in which Munch painted The Scream, let's focus on the disturbing face that seems to be screaming in the center of the work. 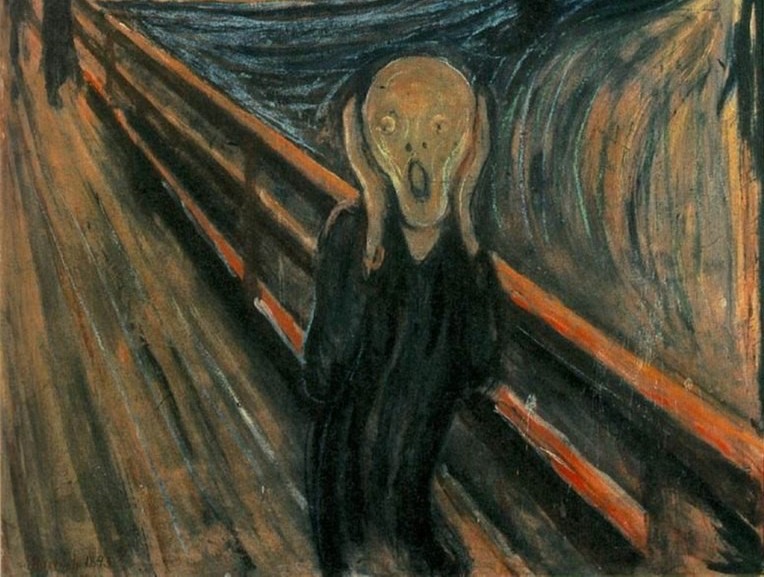 A simplified face, devoid of hair and all human warmth, this is how we can describe this face. 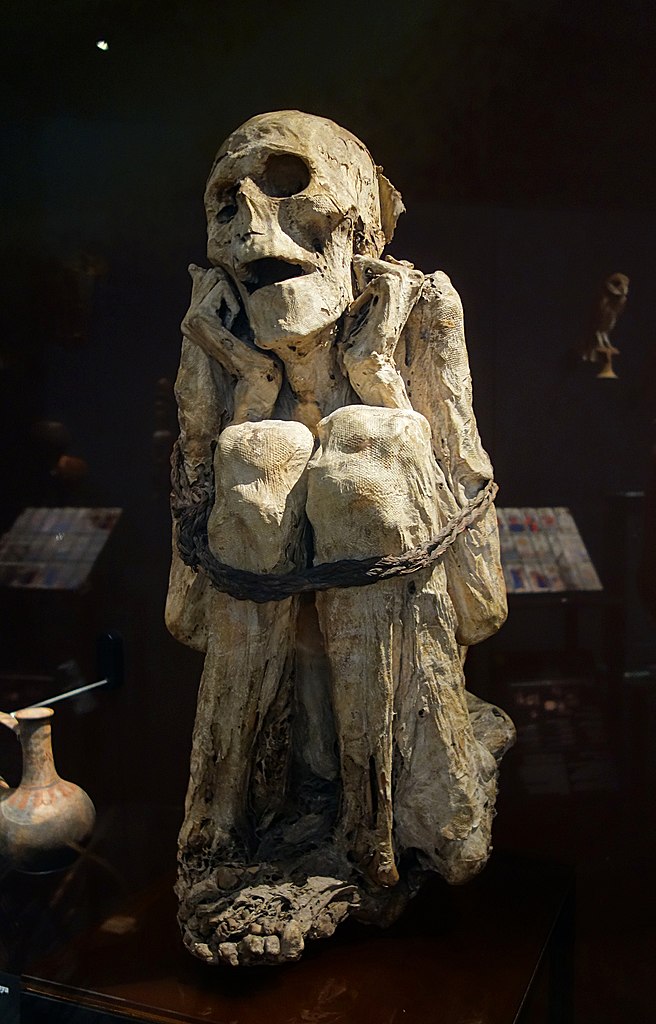 A Chachapoya mummy at the Musée de l'Homme in Paris - Velvet ©

In 1978, the art historian Robert Rosenblum suggested that Munch was inspired by the mummies of the Peruvian Chachapoya people.

Indeed, Edvard Munch was living in Paris in 1889 at the time of the Universal Exhibition. It is on this occasion that he could have seen these mummies from South America. In fact, they strongly resemble his enigmatic character.

Paul Gauguin was also inspired by the Chachapoya mummies, as evidenced by the figure seated at the bottom left in his huge oil on canvas entitled: Where do we come from? What are we? Where are we going?.

Two fun facts about the Scream

Since 2010, the Scream has its own emoji. It symbolizes fear, awe, dread or disbelief. 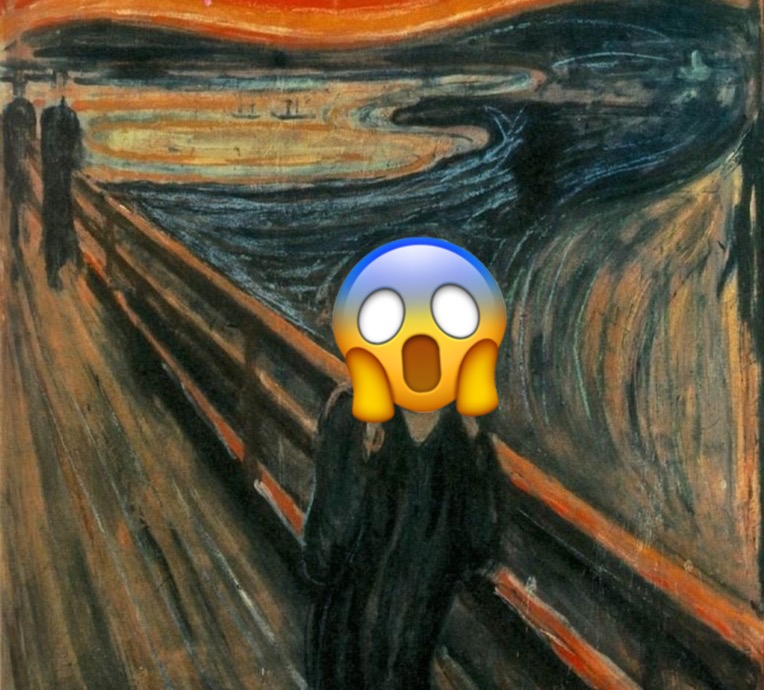 In May 2012, the 1895 pastel version of The Scream was sold by Norwegian billionaire Petter Olsen for $119 million. At that time, it was the most expensive work of all time. 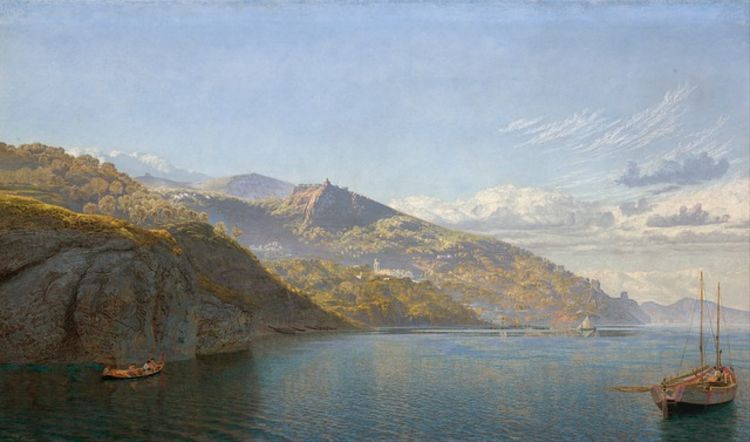 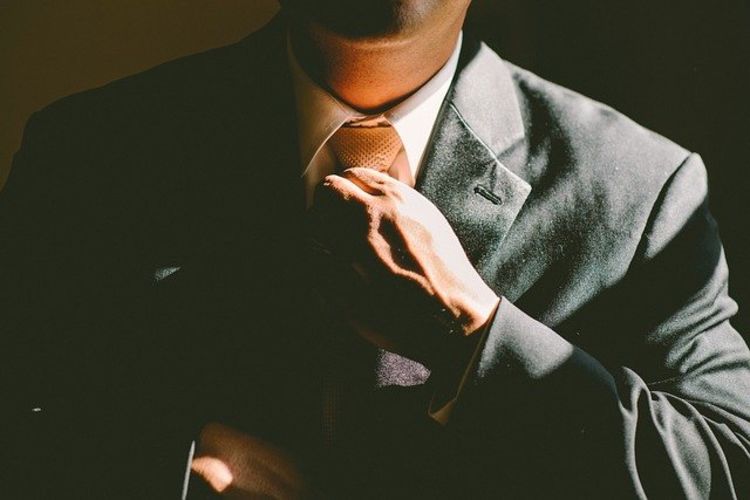 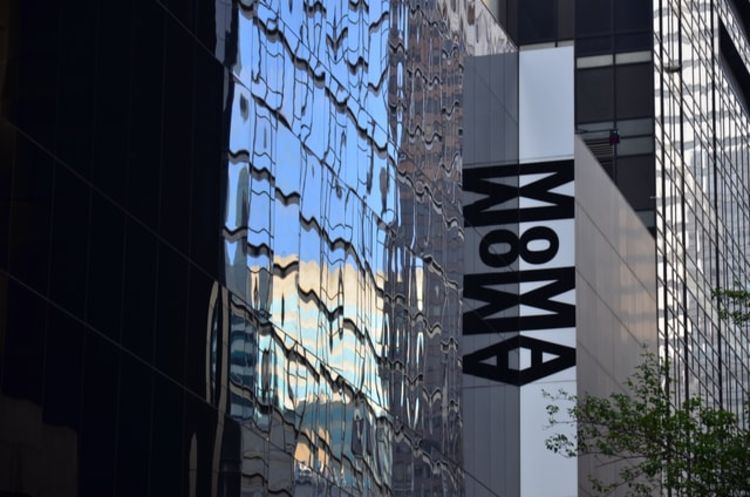